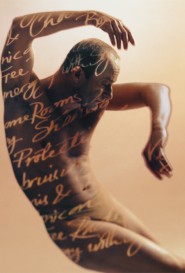 Film components were designed for Body Of Work which were screened on stage, one for the Gala performance at the Sydney Opera House and the other for the show that toured nationally in Australia in 2000. Part of this film was a documentary segment shocasing the early days at the Sydney Dance Company which features the behind the scenes of Old Friends New Friends and the touring in Europe (Paris, Italy, Sicily) in the 80′s and early 90′s. This segment finishes with a goodbye to the dear friends lost since (as of 2000).