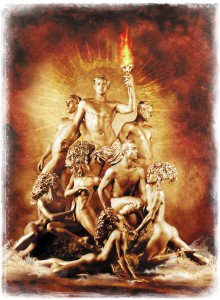 Graeme Murphy: “Dr Suzanne MacAlister and I compiled a framework of interlinked stories concerning some of the less known aspects of the life of Heracles, using myths recorded by ancient Greek-authors spanning many centuries. Central to our process were Pindar’s Odes, or ‘Epinicians’, and his frequently used theme that the Olympic Games were founded by Heracles. From this skeleton Graeme has constructed his own theatrical event adding extra characters and sub-plots in much the same way as ancient authors treated their inherited myths.

I wanted the music for Mythologia to resonate with the antiquity of the period without attempting to recreate or mimic what little is known of ancient Greek music. It also had to provide a cavernous sound canvas in which the dance could revel. The setting of the choral text follows, as well as we could determine, the rhythmic rules of ‘sung1, as opposed to ‘spoken’ Greek in the era of each of the authors. What you will hear is the result of the interplay between these three factors.”

Apart from our very own Olympic anthem (“Ariston men hüdôr” – Pindar, Olympian 1.1-8), the central theme of Mythologia is taken from Phainetai moi (fragment 31) by the most famous female poet of the ancient world – Sappho: 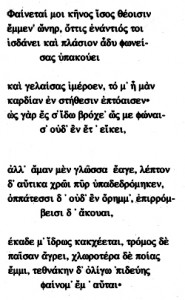 That man seems to me to be equal to the gods – whoever he is who sits face to face with you and, from close by, listens as you talk sweetly

and as you laugh in your lovely way, a thing which excites the heart in my breast; for whenever I set eyes on you for just a moment, then it is no longer possible for me to utter a single word,

instead my tongue becomes locked in silence, and straightaway a flittering fire runs beneath my skin, my eyes register nothing, and my ears ring,

sweat drenches me, and a trembling takes hold of all of me, I become more dewey than grass, and to myself I seem to be close to dying.

It was his first labour – he delivered Zeus’ hallowed precinct from the lion, and covered his golden hair about with the terrible gaping jaw of the beast, and from his back he trailed its tawny hide.

Zeus is invoked to bless the games
Homeric Hymn XXIII

[ Oh Zeus! ]
Be gracious, far-sounding Son of Cronos,
most glorious and most great. 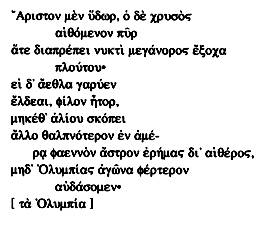 Best is water; but there is another – gold – gold outshines by far any lordly wealth, like a fire blazing in the night.

But, my dear heart, if you long to celebrate contests, never seek another star burning more radiantly by day through the bright upper air than the sun, nor ever let us sing of any contest greater than the Olympic games.
[ the Olympics! ]

Then his spirit stirred him to journey to the Istrian land. There it was that Leto’s daughter, Driver of Horses, received him as he came from the glens and winding streams of Arcadia …

Let’s drink! Why do we want lamps? There’s a finger’s breadth of day left. Fetch the big cups – the special ones. For the son of Semele and Zeus gave men wine to bring forgetfulness. Pour it in, mix two parts wine to one of water, fill it to the brim, and let each cup follow one on the other…

But even Amphitryon’s son, the bronze hearted one who confronted the savage lion, fell passionately in love with a boy, the beautiful Hylas, whose locks were yet uncut. He was to the boy as a father to a dear son, and used to teach him everything, all that he himself had learned on his path to valour and fair repute. He was never apart from him …

For in ways such as these Heracles himself had nurtured the boy, ever since he had first carried him off as a child from his father’s house; his father, noble Theiodamas, the one whom Heracles had ruthlessly slain amongst the Dryopians over a plough-ox. 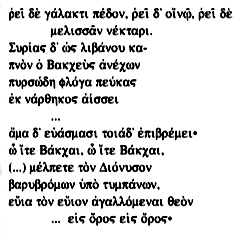 The ground is flowing with milk, it is flowing with wine, it is flowing with the nectar of bees. And the Bacchic one raises on high the blazing flame of his pine-torch and lets stream forth at a rush from his wand a smoke as of Syrian incense
…
And in the midst of the Bacchanalian cries he makes his words ring forth: “Onwards Bacchants, Onwards Bacchants (…) sing praise of Dionysus to the deep beat of the drums, calling ‘euia, euia’ as you glorify the awe-inspiring god
… to the mountain, to the mountain”.

The pronunciation of these texts has been carefully considered with regard to the rhythmic schemes likely to have been used by the original authors.