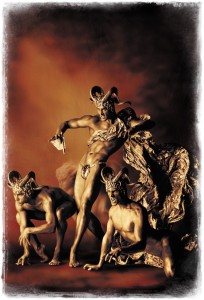 Some of the earliest accounts of the Olympic Games come from the Greek poet Pindar (early 5th century BC) who was renowned for his Odes celebrating victors of the games at Delphi, Nemea, Isthmus of Corinth and Olympia. In these victory odes, sung by a choir, Pindar names the great hero-god Heracles as the founder of the Olympic Games and the ultimate champion to which all others aspire.

In Mythologia we have created our own Olympic Ode in the manner of Pindar, but with Heracles himself as both champion and main subject. Like Pindar, the amazing exploits of Heracles are sung by a choir, and like Pindar we digress into other myths and tales linked directly or indirectly to the hero. As Heracles is already famous for his great achievements such as his Twelve Labours’, we have chosen to present in Mythologia some of the lesser-known myths surrounding this paradoxical figure.

Pindar’s victory odes usually took the form of a choral hymn (Mythologia follows this tradition). Commissioned by the winning athletes or their families, they were sung by a choir of men and boys either at the closing ceremony of the Games or once the victor had returned home at a gathering of his family and friends.

Pindar’s challenge was to glorify his victor’s achievements, by cultivating a link between the victor and a mythical hero (Heracles was perhaps Pindar’s favourite). The odes masterfully tied in the victor’s achievements with pre-existing myths, moral maxims and praise of the gods. Sometimes a number of tales were woven together to present a unified moral message. In this way Pindar’s subjects grew to embody the ideals and values of the ruling aristocracy – beauty and strength, wealth and power (so long as wealth was not carried to excess), restraint and temperance.

According to tradition, the first Olympic Games were held in the early 8th century BC, and were the province of the pre-democratic aristocracy. By the time of Pindar, victory was pursued for glory and immortalisation in song, not only for the victor himself but also for his family and polis. There is historical evidence to suggest that the Games continued unbroken on a four-yearly basis through the changing forms of society and governing powers until the end of the 4th century AD at which time they were abolished by the Christian Emperor Theodosios I as being a pagan religious festival. 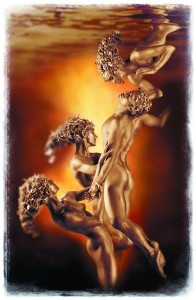 The great ship Argo sets sail. Hylas, filling a pitcher at the Lake of Pegae, is pulled to a watery grave by nymphs appearing from the deep.

SCENE I – The First Olympic Games 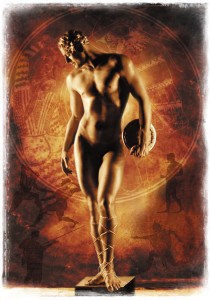 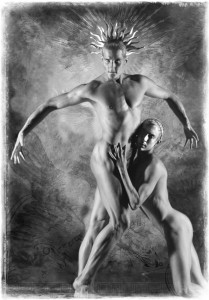 In the guise of a magnificent eagle, Zeus swoops down on Ganymede and carries him up to Olympus to act as his cupbearer, serving nectar to the gods.

While hunting a golden-horned hind, Heracles is confronted by Artemis, Goddess of Dance and Hunting. The stag is revealed as Callisto, favourite of Artemis.

Callisto is alone in the woods. Disguised as Artemis, Zeus seduces Callisto then brutally rapes her, despite her defiant strength.

Eurytus throws a lavish banquet to honour Heracles. In a drunken state Heracles forces Iphitus, Eurytus’ son, to drink until he drowns in wine. Zeus calls on Omphale, Barbarian Mistress and Queen of Lydia to take Heracles into slavery.

The secret of Callisto’s pregnancy is revealed. Artemis, outraged, exiles Callisto from her troupe. 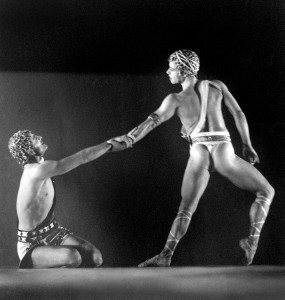 The choir sings the story of Heracles finding Hylas, and how with Eros’ assistance, the two are never apart. 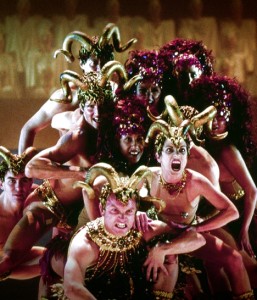 Pan is joined by a band of Maenads, Nymphs and Satyrs. Enraged with lust, a full-scale Bacchanalia ensues.

The Argo once more emerges from the mist. Heracles and Hylas disembark. Hylas approaches the Lake of Pegae -and his watery grave. Heracles, realising his beloved has disappeared, accepts his destiny and ascends to Olympus to become immortal with the gods.