POPPY – the life and art of Jean Cocteau 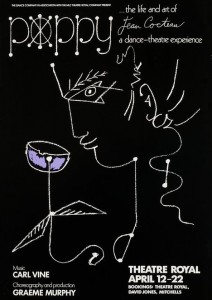 By the end of 1977, his first year as Artistic Director, Graeme Murphy had staged mixed bills comprising commissions from Australian choreographers, existing works and several premieres of his own devising. His own creative imagination was burgeoning and he felt it was time to attempt something truly startling that would challenge the status quo.

So at age 27, Graeme Murphy created his first full length work – Poppy – a dance work in 2 acts based on the life and the art of France’s beloved poet, artist and filmmaker Jean Cocteau.   It was certainly ground breaking, utilising contemporary dance as a language to construct a narrative dance/theatre work, transporting its audience into Cocteau’s world through a minimalist design realised in a Cocteau-esque style.

It was widely asked in the media why Murphy had chosen Jean Cocteau as a subject for an Australian choreographer and company? Murphy replied that someone as universally creative as Jean Cocteau transcends colloquialism.

Act I unfolded in cinematic style with dissolves between scenes, each one building on the other to vividly capture the artist’s young life, his fascination with the colourful characters of early 20th Century Paris & particularly his collaborations with Diaghilev and the Ballets Russes. 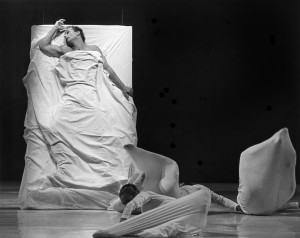 Poppy moved from genteel and epoch defining Parisian society in Act I, to an edgy and hallucinogenic Act II. Staged as a dazzling stream of consciousness, it vividly portrayed the artist’s addiction to opium and its profound effect on his work. For Jean Cocteau, all art was poetry.

For Poppy he commissioned young Australian composer Carl Vine who had written his first ever dance score Tip for Murphy the previous year.  Poppy was indeed challenging and Vine’s much admired score paid homage to the moods and sounds of the period in Act I and with its powerful, electronic soundscape in Act II, reflected Cocteau’s struggle to obey Diaghilev’s command “Astonish me!’

For the premiere season at Sydney’s Theatre Royal in April 1978, Graeme Murphy commissioned painter George Gittoes to design scenic elements and Joe Gladwin to devise the puppetry used so wittily during Act I.  Later, Murphy invited Kristian Fredrikson to further develop the sets and costumes.

Murphy was still dancing in those early days of the Company and so it was no surprise to have him perform the role of Jean Cocteau and consolidate an unforgettable partnership with dancer Janet Vernon, his muse and creative associate.  Plus there was an uncanny physical resemblance between Murphy and Cocteau that enriched the whole premise.

Graeme Murphy won the Sydney Critics’ Circle Award for the original production of Poppy, an honour usually reserved for playwrights and theatre directors.

Its legend began to grow across Australia and Poppy toured extensively.  After the premiere it was quickly transferred to the Drama Theatre of the Sydney Opera House and subsequently toured to Brisbane, Canberra, Melbourne, Hobart, Launceston and Adelaide.  Three years later it was presented to rave reviews at City Center in New York and Sadler’s Wells in London.

So Poppy did make a difference.  This was a time when contemporary companies in Australia had almost no audience and not much touring and the public had little appetite for their offerings.  With Poppy’s succès d’estime, Graeme Murphy’s reputation grew and so did audiences.